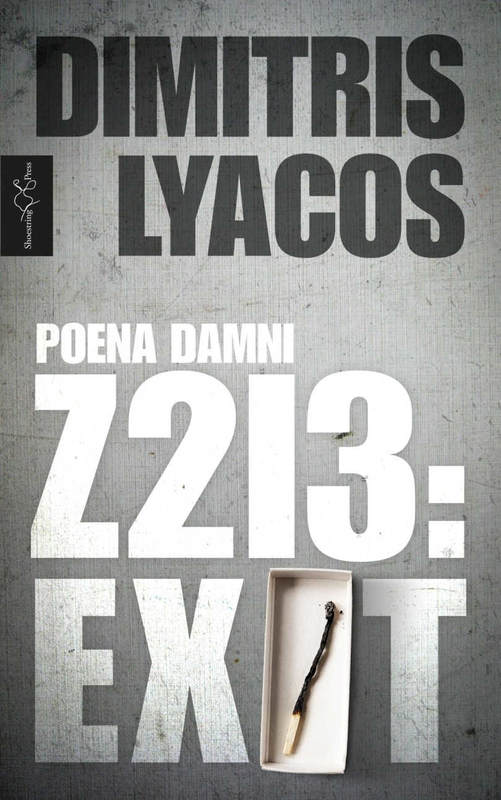 Z213: EXIT is the first installment of the Poena Damni trilogy: a camp, a train, soldiers, a Bible with notes inside, encroaching darkness, the struggle to remember, the struggle of hiding, physical pain. As if waking up in a nightmare an escapee recounts his fleeting experiences in a series of fragmented diary entries in a hide-and-seek game with Death or even God. Written in a unique prose style, at times bordering on poetry and conveying a "pilgrimage of the soul" through a series of increasingly haunting pieces, Z213: EXIT creates the feeling that reader and narrator are led together through an eschatological experience. Horror is created by the scantiest vocabulary craftily combined to form a broken, unstructured syntax, seemingly tight, but leaving enough loopholes through which the reader's subconscious fears can pop in and out. Although evidently postmodern, this is a book that does not undermine or shrink the traditional Grand Narrative themes; on the contrary, it thrives on them.

A fierce book that is as much puzzle as narrative, Z213: Exit is the first in a trilogy (known as the Poena Damni) that represents more than three decades of work. Dimitris Lyacos uses a fusion of stream-of-consciousness, verse, and prose to construct this fascinating narrative that approximates a journey made in consecutive nightmares while addressing the big issues that have defined the human experience.

The style of the language in the prose sections is most reminiscent of a fragmented version of McCarthy's hyper-lucid, hallucinogenic prose in Blood Meridian. That shockingly vivid imagery is there also, but there is so much more to Z213: EXIT. Never has so small a book seemed so infinite.

It's tempting to read the entire 'Poena Damni' trilogy as a response to the unremitting horrors of the 20th-century, and it's hard to avoid associating the camp, the soldiers, and the guard towers with the disturbing Second World War images that should now be part of the collective subconscious. But Lyacos' insertion of Biblical and mythical motifs suggests a far broader project, covering all human history. 'Z213: Exit' can be read as the first volume of a postmodern epic.

by The Missing Slate

No other writer can evoke the blurry, ambiguous feeling of dreaming quite like Lyacos. His work has been described as 'apocalyptic' and 'eschatological'. 'Purgatorial' might be nearer the mark. Where else but in a dream does one grapple, over and over again, with one's own soul in all its grisly glory?

by wrinting.ie/Prick of the Spindle

By pulling at the eternal literary threads from Greek antiquity and beyond, and coupling them with dystopic landscapes, Lyacos has woven a narrative that is relevant and timeless in the way it incorporates myth with modernity.

by Ezra Journal of Translation

Lyacos shuttles the reader from the large-scale trauma of social collapse to the devastatingly intimate at dizzying speeds.

A truly unmatched piece of prose in content and style, Poena Damni Z:213 Exit might be short in size, but burgeoning in complexity.

by The Opiate Magazine

Blanchot's powerful and fragmentary contemplation Writing of the Disaster leaves me dumb and dumbfounded as I wander in a text of light and shadow, shapes and voids. Dimitris Lyacos makes admirable additions to such fragmentary writing. If an experimental book can be grounded, Z213: Exit is more so than Samuel Becket's How It is.

by Your Impossible Voice

A hellish agony is woven throughout the work and will draw comparisons to Dante but rest assured this is original writing unique to Dimitris Lyacos. Repetitive images and metaphor of stations and trains, of walls, of blood, of caves and pits, of clawing in search of light to the barrenness of plains, of yellow darkness, of darkness, of dark. The rhythmic use of language pulsates through each line of the book, a musicality in the despair.

by North of Oxford

From the first page to last, Z213: EXIT is one word, unique. It certainly is not a traditional novel or conventional poetry, the words themselves veer from neat, almost atomic precision to scattered unhinged lettering and sporadic lonely spaces. [...]Is this a masterpiece? For many, it will be.

by The Literary Nest

Myth, in Lyacos, does not present itself as an organic whole upon which his writing is articulated: Z213: EXIT is not a new reading of the myth of Odysseus or Moses. Lyacos does not construct a new myth either. What he does is to turn the myth inwards, towards its deep structure, emphasizing its basic constituents without the intervention of a constructed plot. The words of the trilogy are the fragments of the echo of a primordial explosion, which, if you fit them together, compose the innermost name of tragedy.