WITH THE PEOPLE FROM THE BRIDGE 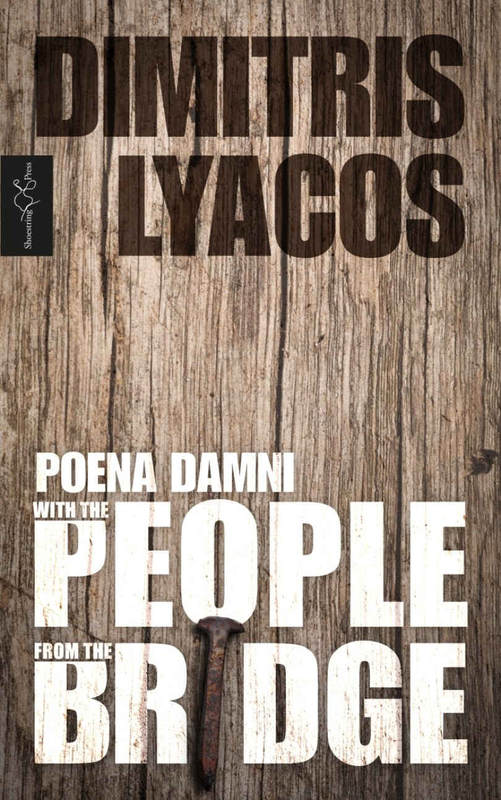 Acclaimed by critics worldwide, With the People from the Bridge is a unique distillation of literary genres, an all-in-one densely layered poem, play, postmodern epic, a small-scale wide-scope apocalyptic tragedy. An immersive experience where voices issue from characters in a state of trance, drift crackling out of a TV set or a cassette player and the contours of reality begin to darkle and shift while trains still pass up overhead, audience members get up to leave, performers creep out through back-exits. This is the day and the place for the imminent return of the dead and the reader sees them approaching as he peeks through the gaps of Lyacos's elliptical storytelling.

Radical in its recasting of content and narrative form this is one of those rare books that unravel visions of wholeness and collective redemption within the darkest aspects of our folk and religious tradition. Perhaps the dead can rise again. Perhaps the world is ending only to begin afresh.

Billed, as avant-garde, postmodern and genre-defying, the book is potentially intimidating but actually quite easy to slip into. Epic in feel, but a breeze to consume in one sitting; abstract and mysterious without being obscure - there's much to engage with and be provoked by (...)Pace-wise, the book is rhythmic and relentless: it marches along and the reader is swept along with it (...) so that a cumulative sense of unease is instilled in the reader, an unease that is compounded (as in stamped on) by the book's macabre epilogue-like sign-off.

Dimitris Lyacos's long, tripartite poem, Poena Damni, is one of the most important and challenging literary works to come from Greece in the past generation. (...) Symbolic polyvalence takes the place of metaphor, and Lyacos is able, because of the temporal simultaneity he creates, to suggest a complex and reverberant matrix for which what seems the plainest of speech will serve. At the same time, however, broken utterance and fragmentary syntax undercuts this apparent simplicity, leaving the reader suspended over a void. It is also belied by the wealth of cultural reference embedded in it by silent quotation and allusion. This is no parade of learning for the critical cognoscenti, however. As in Beckett, the pressure of an entire civilizational epoch lies behind the most seemingly casual and transparent rhetorical gestures.

by The Critical Flame

While The First Death is dominated by imagery of the infernal, it is (in its way) as skillfully articulated a vision of its theme as was Hieronymus Bosch's Garden of Earthly Delights in another time and in different terms. Balancing Lyacos's labyrinth of shocking imagery there is the counterweight of intellectual stringency and spiritual austerity, so that the reader is invited to contemplate what is in effect an abstraction of horror, Lyacos's disturbing feast of all fruits.

Despite the reluctance to pin Lyacos's work down to any specific site of struggle, the reader comes away also having found in his words one of the most evocative and moving depictions of the sense of terror and hope that so many precarious lives experience today in making their journeys by boat or by foot to the various promised lands of plenty.

by Cha: An Asian Literary Journal

The interesting thing is that, after so long spent in this mad, desperate company the sane boundaries of what we think of as the 'real' world begin to darkle and shift. Perhaps the dead can rise again. Perhaps the world isending only to begin afresh. This is Lyacos' great gift. Shorsha Sullivan's great skill is that he was able to translate it so seamlessly,so well, that his voice disappeared into the margins.

There are other metaphors of course -- in fact the entire piece is a Christian metaphor. Deprived of the beatific vision, this is what you get: life on the bridge. Implicit in this equation is a totalitarian mindset little valorized by modern sensibilities. Whereas William Carlos Williams or Walt Whitman are poets of a secular Word Incarnate, Lyacos is the poet of the secular Word Impersonal.

In the end, categorizing With the people from the bridge seems somewhat beside the point. From the poem's decrepit setting comes a narrative that purposefully resists classification, if only to offer the reader a truth both pragmatic and optimistic. Those willing to grapple with Lyacos's verse will find themselves both frustrated and touched; perhaps both. Indeed, that ambivalence is precisely the point, as Virginia Woolf long ago said.

There are tons of literary, philosophical, religious, mythological references in Lyacos' With the People from the Bridge. They have all picked up by reviewers, for they are pretty transparent though perfectly assimilated. Besides Dante's Commedia (a tenuous link, in my opinion), the Apocalypse and all apocalyptic dystopias. Then those masterpieces where nothing happens, and we are stuck into a suspended labyrinth: Kafka, Beckett. Artaud and the theater of the absurd. Classic tragedy, classic epos, Homer of course.

Like any great love story, our protagonist here worries, eventually they will get/to us/they will separate us. Unlike most love stories, she is already dead, and it is her corpse he clings to. Overall, the text is ambiguous but startlingly human.

I recommend With the people from the bridge because Lyacos delivers a story in which we can all relate. We all have or will experience loss. The vehicle in which he takes the reader on this sad journey is unique (and the genre is...heck if I know), which is a good thing. I like works of art that aren't easily definable. I also like journeys that are fragmentary because all of our journeys are fragmentary. We're all trying to get somewhere or to someone. We're all on a bridge.

It is often said that good stories show instead of tell. Dimitris Lyacos's With the People from the Bridge gives such a deeply felt sense of what it must feel like for a vampire to awake from the grave or the morgue that Lyacos never has to tell his readers vampire.

From Beckett, Dali, Dante, Sartre, and Kafka (already mentioned by critics such as Michael O'Sullivan, Allison Elliott, or Manos Georginis) to Edgar Allan Poe, Juan Rulfo, or even Sarah Kane, Lyacos's writing reveals an unparalleled understanding of the importance of having formidable artistic molds, and of the need to break them or reshape them.

...this trilogy is masterful and it comes to us only once in a lifetime.

Lyacos' text is one that seems written to simultaneously challenge literary critics, be within reach of most readers, and tell a story that comes across as vital to the author personally -- both intellectually and spiritually.(...)To his credit, there is a sense that these motifs are held terrifically taut, pushing our collective unconscious into a modernist realm of humanistic questioning and incertitude while we rely on the subliminal understanding that dwells deep within us.

Lyacos effectively blends such science fiction elements like the above with religious, as in the first poem, where the narrator reads from one of the Gospels, where Jesus expels an unclean spirit named Legion from within a man (Mark 5:9). It is the balance of these two elements that has the reader experiencing the feeling of being trapped between heaven and hell, wondering which destination is likely to be permanent yet hoping for the best option.

It's a real masterwork in that it accomplishes the avant-garde task of throwing the reader in all directions simultaneously. It's a hearty meal, a marvelous, lively response to madness, to death and to reality, all of which we contain and run from constantly. In a sense, that would be the trilogy in a nutshell if the nut itself were not so remarkably complex.